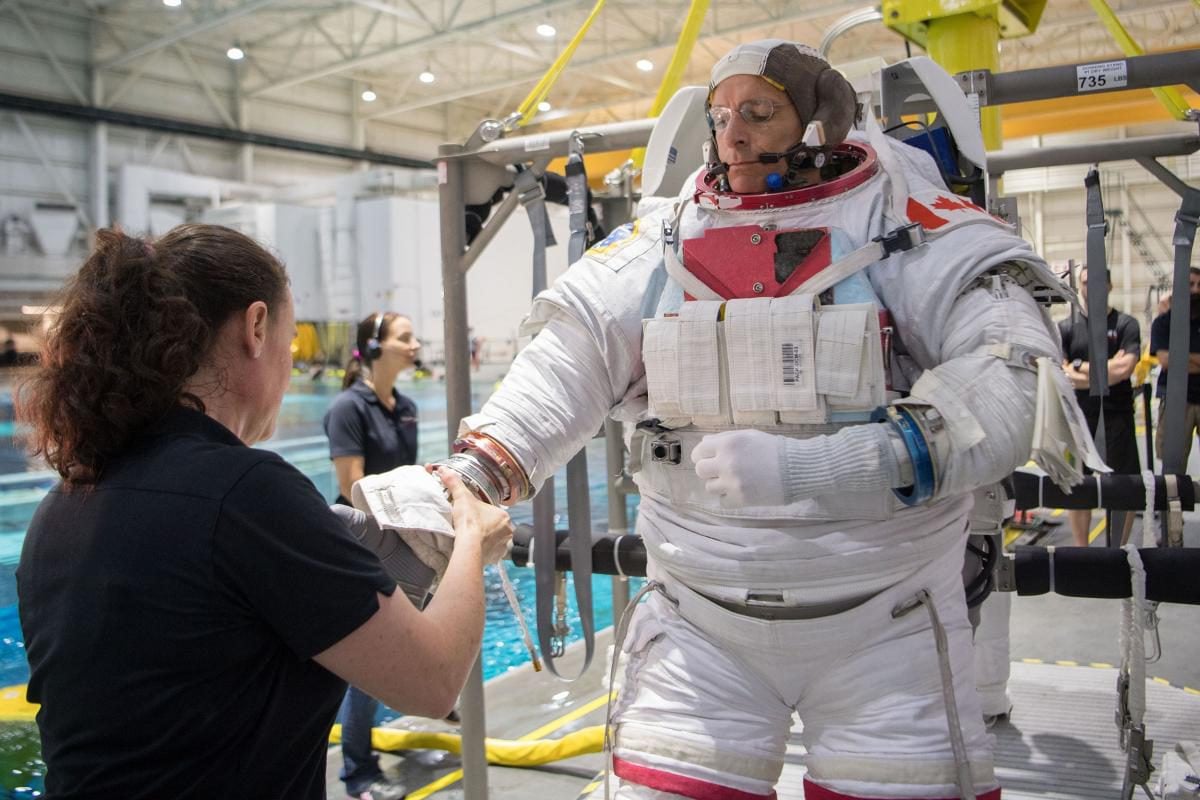 Next month, Canadian Space Agency astronaut David Saint-Jacques will fly into orbit to spend six months aboard the International Space Station on Expedition 58/59 — the first Canadian astronaut to blast off since Chris Hadfield in 2012. This year saw Saint-Jacques splitting his time between Houston, Texas, Cologne, Germany, Tokyo and Moscow, training with his fellow crewmembers (U.S. astronaut Anne McClain and Russian cosmonaut Oleg Kononenko) for the different aspects of the mission, including launch, spacewalking, robotics and other experiments they’ll be conducting. Canadian Geographic reached Saint-Jacques by phone during training in Moscow, where the physician, biomedical engineer and pilot spoke about the medical technology he’ll be testing in orbit, what he’s bringing with him, and why space exploration matters.

On emergency training and being ready to fly by the summer

We’re now in the crunch of all the practical crew training. We spend most of our time together in the Soyuz simulator, the ISS simulator or the centrifuge, practicing how to respond to dire emergencies such as a fire, a rapid pressure drop or a meteor strike. We’re really applying our survival skills, and it’s making things feel that much more real. This week I also tried my custom-made vacuum space suit in the same vacuum chamber used by cosmonaut Yuri Gagarin [the first human to travel into space, in 1961]. It’s an experience, going through that history here in Moscow.

We train to be ready to fly six months before our scheduled launch date. In the summer I’ll go to the launch pad to back up the crew who are flying ahead of me, and who we’re scheduled to join on the ISS in December. All the other training continues in the meantime, and because I will be the co-pilot of the Soyuz rocket that will bring us to space, with Soyuz commander Oleg Kononenko, that in and of itself makes up about half of all the training that I do. I’m not there yet, but I will be ready. 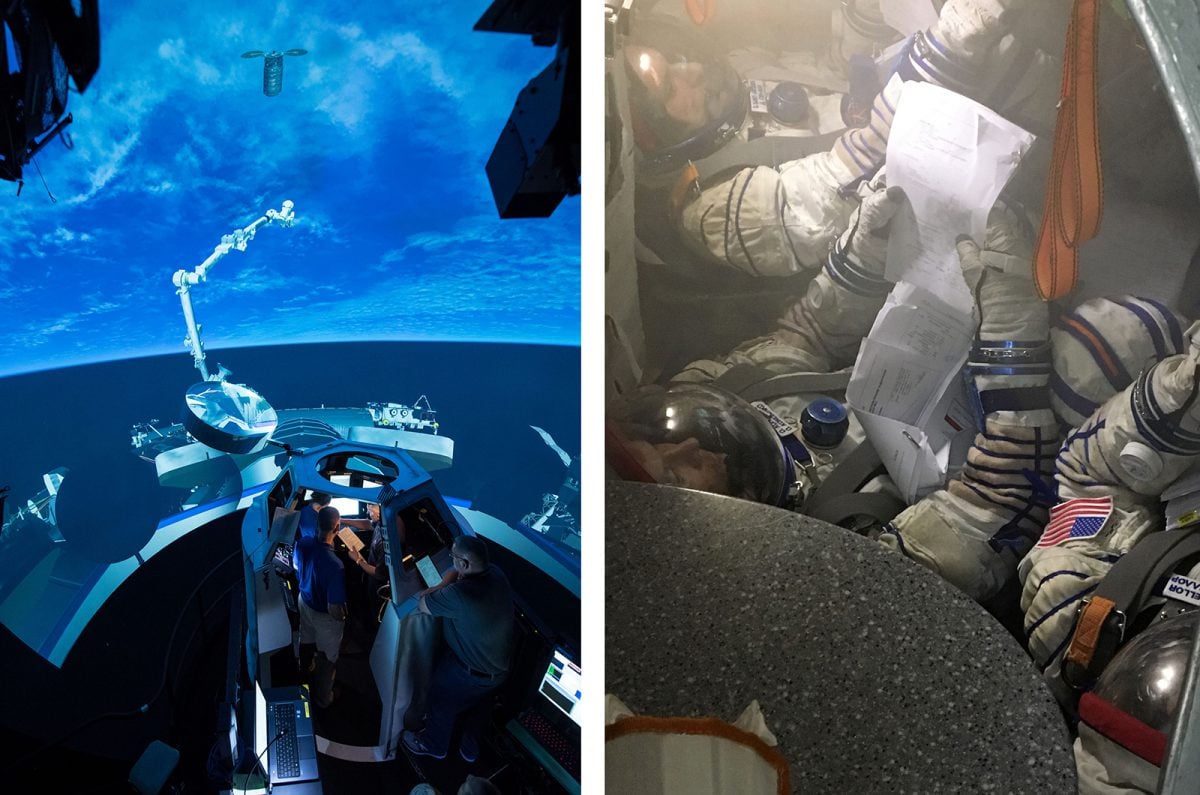 On the research he’ll be conducting

The main research theme on the ISS — and the Canadian Space Agency’s definite focus — is life sciences and medical research. Spaceflight is bad for you, and in ways that resemble diseases that afflict us all on Earth. Microgravity, more exposure to radiation and increased stress affect our immune systems, so ailments develop quickly in young astronauts and in a very isolated, controlled manner. We’re the perfect guinea pigs! We’re laying the groundwork for the constant monitoring of astronauts’ immune systems during their missions.

Canada has universal healthcare and a population dispersed over huge regions, so the provision of good health care to people far away from city centres is a national priority, and one reason we’re heavily invested in space medical research. All of the solutions that are developed for remote medical care of astronauts in orbit directly apply to people on Earth. I used to work as a physician in an Arctic Inuit community — Puvirnituq, Que., on eastern Hudson Bay — and I can see the experiments I’ll be doing and the technology that I’ll be helping test and develop being applied in the nursing stations that are peppered around the Arctic, helping to give them more autonomy for medical care.

I’ll be wearing a kind of “smart T-shirt” that takes your blood temperature, heart rate and other vital signs without you needing to be all plugged in and wired up. You can imagine how useful this could be for elderly people with medical issues, for example, who could be remotely monitored by a nurse while they’re in their home. You could potentially make the life of patients in intensive care units easier, or help deployed military. There are all kinds of applications for what we call isolated medical care.

Another piece of Canadian tech I’m using is a “bio-analyzer”: a miniature blood-testing device. This is something like the phone-sized machines diabetics use to prick their finger and take a reading of their blood sugar, but it’s being developed to do every blood test that we run in hospitals. Right now, when we want to do these tests while we’re in orbit, we fill a test tube, freeze it and put it in the next cargo shuttle that comes back to Earth — it’s the most ridiculous overhead, right? There’s a big incentive to develop this real-time technology, to develop complete medical autonomy. The self-serving space purpose, if you will, is to one day go to Mars, but our operational need for this in space is the perfect excuse to develop all the technology we need to improve autonomous medical care for Canada and the world’s small and remote communities.

The self-serving space purpose of this real-time medical technology is to one day go to Mars, but our operational need for it in space is the perfect excuse to improve autonomous medical care for remote communities in Canada.

On his feelings and focus

I wouldn’t say I’m excited yet. That might sound surprising, but I have so much ahead of me. I feel as if that launch pad is on top of Mount Everest, and right now I’m halfway up. If you ask a climber who’s halfway up Everest if he’s excited, he might tell you that “excited” is not the right word. He’s probably focused, probably hoping he doesn’t trip or fall off, that he can keep managing his energy. That’s kind of how I feel now.

We have so many exams to pass, so many certifications. You’re always on the edge of your seat trying to perform well. At the end of the day, this is a technical job, and you have to perform operations correctly. I’m excited about the rocket launch itself, but I’d be a fool to ignore the fact that it’s dangerous. The best way to mitigate that, though, is to train, to understand the systems and the emergency responses the best one can.

On leaving loved ones behind

If I have one anxiety, it’s that thought: leaving my family, my friends and the Earth. I ask myself, how am I going to cope with that? That is a great unknown that you can’t really train for. My wife and I are spending a lot of time figuring out how best to maintain a semblance of normalcy for our kids throughout training and the mission. That requires a very strong relationship, good teamwork and creative solutions to make it all work. The exercise of balancing hugely demanding mission requirements with the responsibilities of being a husband and a father is probably what I’m finding to be the biggest challenge.

My friends reassure me that kids are very adaptable. They tell me my kids, who are six, four and one, will find it surprising and odd when I’m in space, but as soon as they see video of me doing a couple of flips that will simply become their reality! The magic of children, right? They’ve already grasped the idea that I’m going to this house in the sky. Of course, when I’m up there I’ll be busy and focused, sometimes on doing dangerous things, and it will be important for my peace of mind to know they’re okay.

On what he’s taking with him

I just wrapped up my suitcase, because it doesn’t go with us on the Soyuz, but on a cargo spacecraft that’s launched a couple of months ahead of us. You can’t bring much, so deciding what to bring is an interesting exercise. I’ve packed a mix of symbolic items to remind me of my world on Earth and that I want to take to space and bring back for people as mementos. I’m a history buff and an old-fashioned book-reader, so I’m taking some history books, although I expect I’ll spend most of my free time looking out the window. I’ve also packed children’s books by French Canadian authors, ones that we have another copy of on the ground, so I can read to my kids while they’re flipping along. We’re still in the bedtime story phase of our life, and I’ll be able to continue that from orbit.

On talking politics in space

Astronauts don’t have a no-politics rule. On the contrary, we discuss these things openly. We are proud of being one of those sometimes tenuous links that keep the world together. There is lots of tension here on Earth; governments disagree sometimes and bridges are burned, but we are one of the bridges that remain. We see it as a great responsibility to uphold those standards. We try to be a good example of how humans can work together toward a common goal.

The thing that I’m proudest of, as part of human space flight, is that it makes us a bit wiser, more responsible. Just look at the list of countries that contribute to the ISS: the four biggest are the United States, Russia, Germany and Japan. You don’t need to go very far back in history to see that there wasn’t always collaboration between these four. Space allows us to do this; it makes humans rise above the fray, makes us want to work together. That perspective, of our planet seen from far away, is ultimately one of the most important legacies of space flight. It makes it obvious that we’re all in this together.

Space allows humans to rise above the fray, makes us want to work together. It makes it obvious that we’re all in this together.

On spaceflight and environmentalism

This modern environmental stewardship that we feel toward our planet, I believe we owe it to space flight. From the ground, the Earth feels solid and huge, and the sky is infinite, the ocean is without end. But when you see it from space, it isn’t so. You see it for what it is, an unbelievably fragile beauty, and it is obvious that we can mess it up if we are not careful.

The space station is an unbelievable machine that keeps a crew of six alive in the deadly vacuum of space. But Earth, Earth keeps billions of us alive and has been doing so for millions of years. It is a finely tuned, perfect thing, a miracle and an oasis in the middle of the deadliest place you can imagine. These are things I know, but for now as intellectual abstractions. I think when I finally reach orbit and I look out, it will become an in-my-face reality. 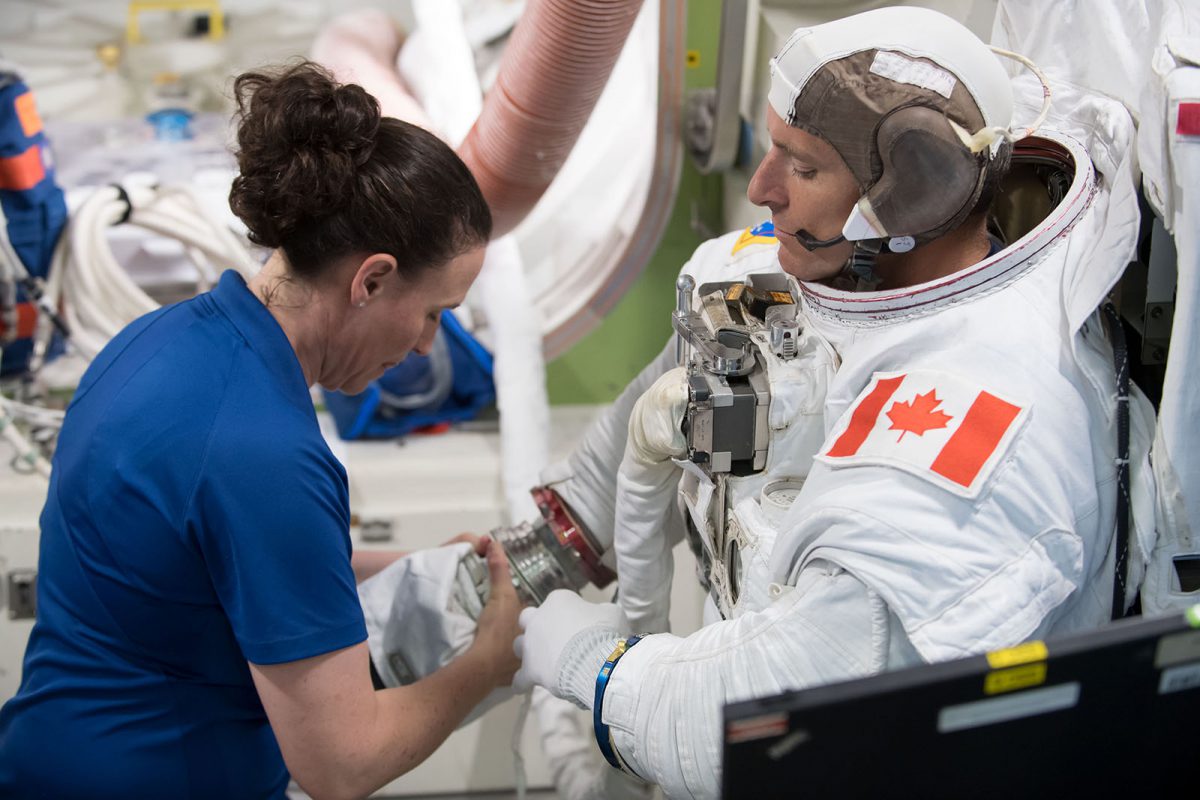 © NASA/Josh Valcarcel
Suiting up for the airlock simulator at NASA’s Johnson Space Center.

On why we must continue sending humans into space

We need space. We absolutely depend on it for our economy, security and communications, as a tool that we use to monitor and preserve our environment and so many other things. You benefit from satellite technology every day, whenever you make a phone call, look at a map, check the weather forecast. Our agriculture is managed from space, and national security and defense, air traffic and marine traffic depend on it. This network of satellites and the data we all use is just as important as our roads and our post offices. Space is a part of our infrastructure, part of modern society. We just don’t see it.

In many cases, private companies designed, built and launched the satellites providing all that data, and continue to operate them. That’s one example of how space is a great investment for a country like Canada. We make money with space. The space station itself is an international lab — open for business. So if a startup company wants to try some new idea they have, or to run some experiment, NASA and the CSA are there to help. There’s a great desire for space technologies to be developed by the private sector, a great desire for space to become mainstream. In a way, space is already commercial, and I think spaceflight is on the eve of a monumental change.