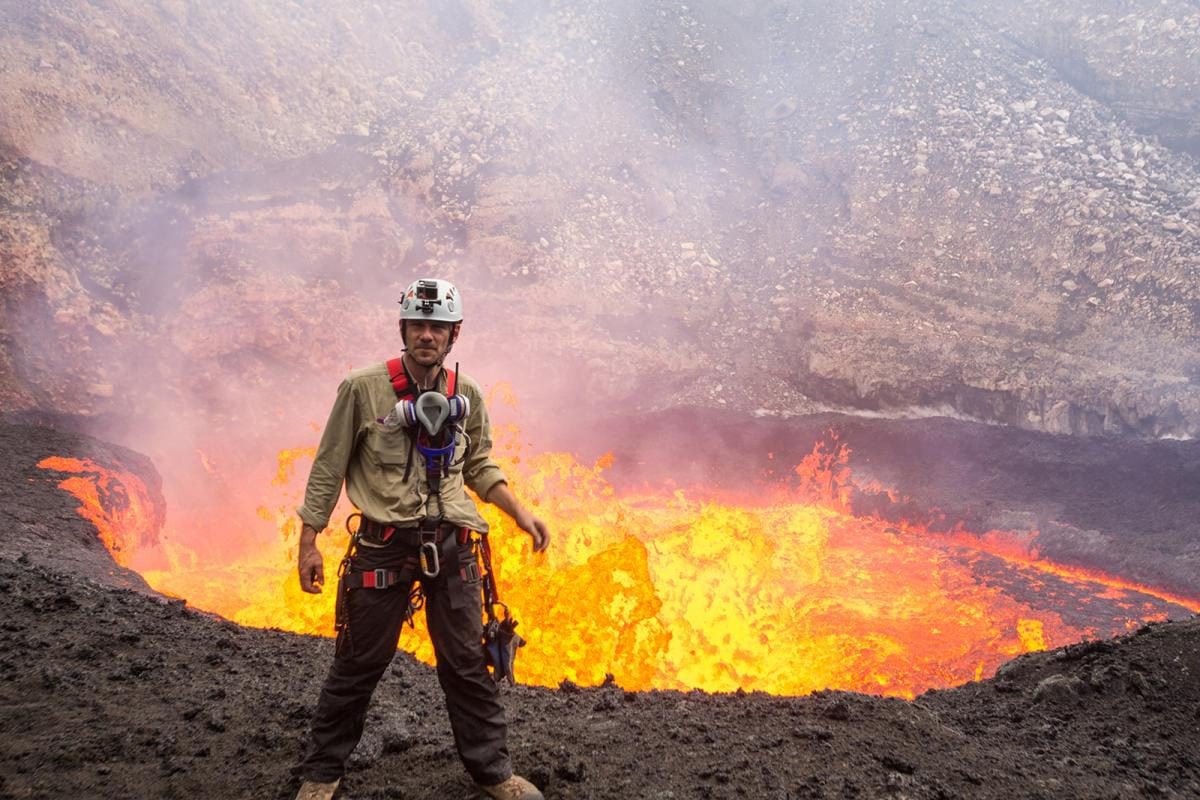 © George Kourounis
George Kourounis stands beside a lava lake inside the Marum crater on Ambrym, a volcanic island in the Vanuatu archipelago, in 2014. To get to the lake, Kourounis and his film crew had to rappel down the side of the crater, which is deeper than the Empire State Building is tall. (Photo courtesy George Kourounis)

George Kourounis still remembers the first tornado he ever chased, near Medford, Oklahoma in 1998. “It wasn’t this pretty, Wizard of Oz-looking elephant trunk coming down from the sky,” he recalls. “It was a dusty, nasty, un-photogenic thing, but it was coming straight for us, and we had to turn around and get the hell out of its way.”

That adrenaline rush was enough to convince the former sound engineer to pursue a life of adventure, documenting nature’s extremes. Twenty years, more than 65 countries, a successful television series and countless close calls later, Kourounis shows no sign of slowing down. An Explorer-in-Residence of The Royal Canadian Geographical Society, he uses his role as a platform to share his passion for the planet and inspire a new generation of adventurers.

On fulfilling a childhood dream

When I was a kid, I wanted to be a marine biologist. I loved the idea of exploring the oceans like Jacques Cousteau. When I got older, life got more practical and I had a regular job, but there was always something in the back of my mind that wanted me to get back into exploring. My interest in the weather and natural disasters gave me an avenue to see dramatic things, travel the world and become recognized as an authority on the extremes of nature, which allowed me to give up my old job and become a full-time, professional explorer.

On the challenges and rewards of chasing storms

You never know what you’re going to see. I’ve driven across Canada more times than most people can even imagine, and sometimes there’s not much new to see — until you start looking up. You have these gigantic storms that can be twice the height of Mt. Everest, all that energy concentrated in one place, and you have to try to understand what the storm is going to do next. When you’re successful it’s very rewarding, but it’s difficult. These storms are travelling at sometimes 40 to 50 kilometres an hour, and they’re not following the road network or obeying any traffic laws, but I have to! 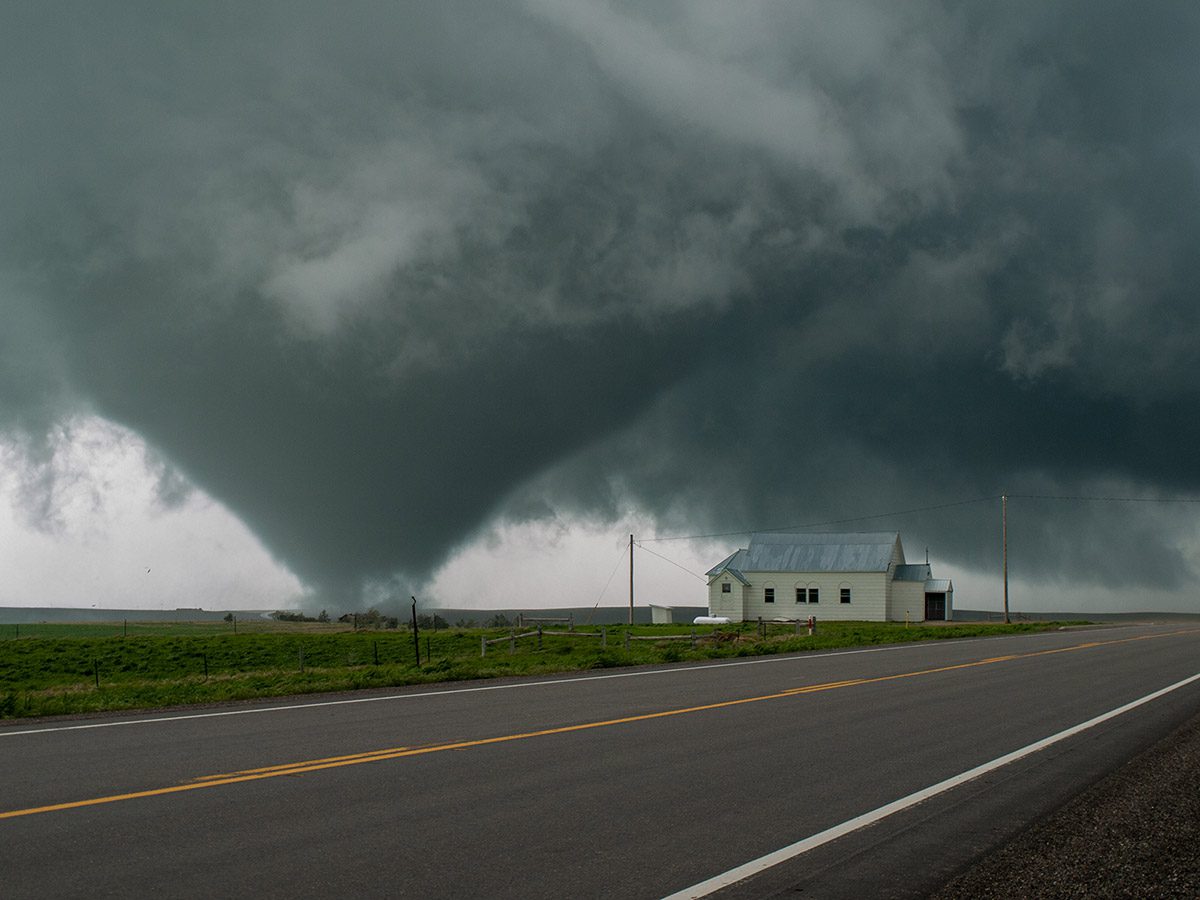 On his highlight reel

Where do I begin? It’s weird because, if I was eight years old and trying to come up with a cool career description, it would basically be what I’m doing now — travelling the world and seeing these amazing places. There’s the Cave of the Crystals in Naica, Mexico, where the air temperature is 52 Celsius with 100 per cent humidity and we had to wear ice-filled suits. Some of the crystals are 10 metres long and weigh 55 tonnes, and it looks like another planet. I’ve rappelled down inside a volcanic crater in the South Pacific that was deeper than the Empire State Building is tall, and at the bottom is a churning pit of molten rock. I went trekking in the mountains of North Korea, behind the curtain of secrecy, and saw places very few people in the West have seen. I’ve been so fortunate to have countless once-in-a-lifetime experiences and I try to never take that for granted.

On where he wants to go next

“I don’t have a death wish. I like to think I have a life wish: to squeeze as much life out of these experiences and these days that I have as I can.”

On fear as a motivator

I want to inspire people to do things that frighten them. I don’t expect people to rappel inside a volcano or fly into the eye of a hurricane with the Air Force. I take things to the extreme, but I do want to encourage people to do something they’ve always wanted to do but were afraid to, because that’s where the best juice in life is. There have been instances where I’ve had to literally stop in my tracks, look up and watch the trajectory of pieces of lava flying through the air and get out of the way. I’ve had lightning strike so close I’ve felt the heat on my face. Being in Hurricane Katrina was absolutely frightening. I don’t have a death wish. I like to think I have a life wish: to squeeze as much life out of these experiences and these days that I have as I can.

On using his platform to sound the alarm about climate change

In recent years I’ve really focused a lot of what I do on climate change issues, because it’s probably the biggest global challenge we face as a species going forward in the next century, and I’ve seen so much evidence of it firsthand. I’ve talked with Siberian permafrost scientists who are terrified that the methane gas being released by thawing permafrost is going to create a runaway greenhouse effect. I’ve been to Bangladesh and talked to people who have relocated from the coast to the city of Dhaka because their farmland is being eroded into the sea. The good thing is that young people growing up right now are so much more invested in looking for solutions to these problems. I’m fearful, but I have tremendous amounts of hope that this generation will steer us onto the right path. 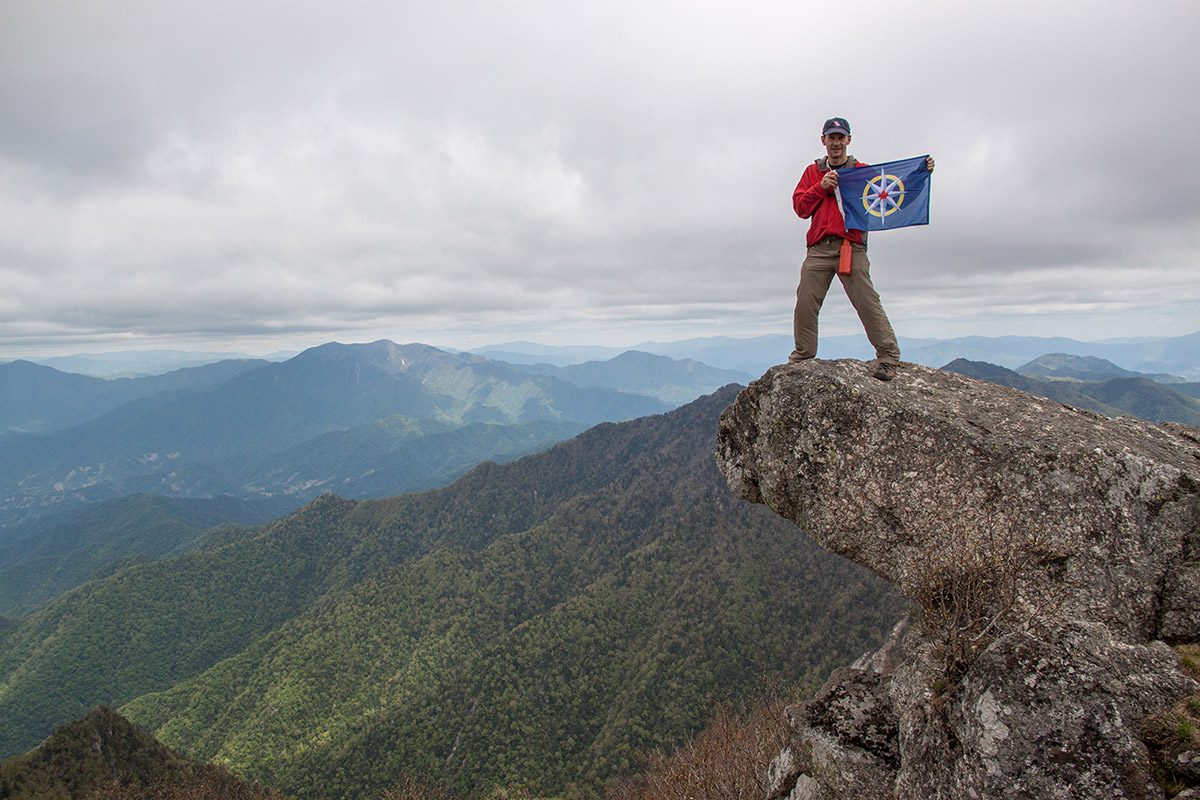 Absolutely. There is so much world out there to explore. We’re making new discoveries in every field at amazing rates these days, and it is absolutely possible for someone growing up today to become a professional explorer. We’ve only just scratched the surface when it comes to oceans, caves, and some of the deepest jungles — not to mention space. We are a tiny speck orbiting an average star in an average galaxy, and when you look at it from a cosmic perspective, to say the sky’s the limit is ridiculous, because there’s so much more beyond that.

For more incredible stories from Canadian Geographic go to www.canadiangeographic.ca